It turned out to be a very successful tournament for all the Geng Table Tennis Academy athletes who attended the event as they brought home a handful of medals.

Sabrina Chen was the most successful medalist with two gold medals and a silver. Although she is 15 years of age she placed first in the U-15 then defeated her older peer to capture the gold in the U-18 and finally had a tremendous run to reach the final in the Women’s Open. Although Sabrina lost in the final, it was a nail biting performance as she fought till the end by losing 4-3 to Irina Schevchenko of Toronto. 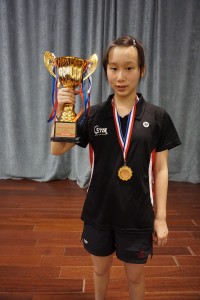 Jean Fei with her unique defensive style is now in her last year of the U-18. She had a great performance throughtout the entire event as she reached the final before losing to her team mate Sabrina. Jean also got a bronze medal in the Women’s Open. 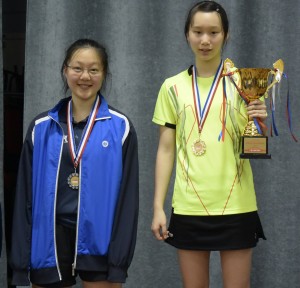 Jean and Sabrina U-18 Medalists

Howard Chen got a bronze medal in the U-18 by winning against a stronger opponent in the quarter final, Mohammed Qatan. 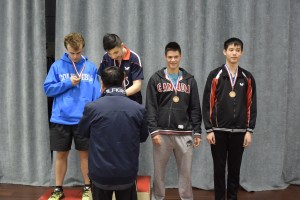 Howard’s Bronze in the U-18

Karen Fei did her part with a very strong performance and defeating a much stronger opponent, Joy Xu of Toronto in her way to capture the bronze medal in the U-15.

Maggie Jin got a bronze medal in the U-13 but she will have the chance to improve her performance in the next year’s Ontario Championships as she still has a year left in the U-13 category.

Richard Xi made the big step of attending his first major tournament to test his skills against the players from the other clubs. It was a great learning experience as he got to play a few matches and compare his table tennis against the competition. He might have not got a medal this time but the experience is invaluable and will make him a better player for the next time around. 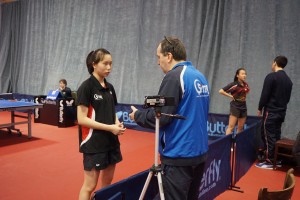